The Doctor become face of god when services become their spirit.

The Philosophy and Concept

Doctors are referred as Gods because they have a portion of our lives and save it when needed. Many bad practices have also damaged the reputation of medical fraternity, labeling it as a money-minting profession. It has destroyed the spirit of service to a great extent. The priority of commerce in today’s mind has reduced the doctor to a mere vendor or a service provider for money. On the other hand doctor has also begun to think like the same.

Modern generation sees this career for receiving a fake status and exploring sources of gaining more and more money. Every now and then we also hear how doctors in big hospitals getting caught by forcing their patients for unwanted operations. It hurts the trust, faith of good doctors' community, and dented the respect of their profession. It has also destroyed the sentiments of thousands of dedicated, honest, passionate practicing doctors who are giving self-less service to the society for the sake of nothing but the health of their patient. Our campaign is to revive the spirit of service and bring those thousands role-model doctors to the public as Doctors Days campaign. Dr Anil Sabharwal, Top Gynecologist pediatrician (also running Sabharwal Hospital, Dariyaganj) is also a wonderful Musician & PIANIST. He talked at length on 'unwinding' when our team visited him with Therapeutic Ragas Music Concept. Very curious to listen our team of guitarists. Later on he played many of his favorite pieces on piano. Amazing to see the spirit of such a great doctor. We appreciate and welcome his support for our 'music therapy' initiatives. We thank role model doctors/opinion leaders of medical fraternity, through live musical greetings, gift of bouquets and a free music therapeutic radio license for their meditation, relaxation, patients and clinic. We also interview them, take their bytes, help them to unwind through a moment of musical entertainment and hear their stories. Also take their feedback, bites, messages and if they have something to communicate for welfare of public. 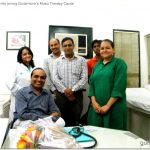 Dr. Manjula enjoying live music by guitarmonk. She also received a therapeutic music radio ‘Kayotsarg’ for her clinic. It has ragas that is well researched for its therapeutic benefits. 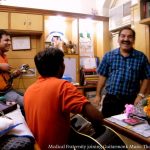 Dr SK Arora in a great mood and moments of joy after listening to live music at his clinic. He is also suggested to listen & apply ‘special researched ragas for healing’ at his clinic by Guitarmonk Records 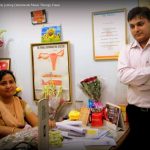 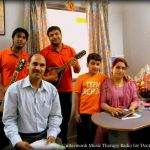 SOME CAPTURED MOMENTS WITH DOCTORS

WE WELCOME YOUR PARTICIPATION

Kapil Srivastava (Founder, Guitarmonk & Concept Developer - Doctors Days) - “We pioneered this campaign in 2010 more as a unique idea and concept to make doctors feel special with our live music. Once we accomplished and reached hundreds of them, we also realized that how much important it is to bring their journey and lives to all of us especially those whose philosophy is “PATIENT FIRST”. It’s the doctors that motivated us to pursue this campaign and never stop it. It’s a good cause and we must listen to them. We are privileged as an organization to be leading this project”